For all those who are in an odd situation where:

To such customers, downloading the movie overnight (using for e.g. wget) would be a big help!

I regularly use this, to download the movie, and watch with non-tech people (my kids) who can't be explained why the movie keeps 'Buffering'!

Windows binaries for GPL'ed GNU software (such as Wget) are heaven sent here:

And if you need a Big-TV experience (for e.g. if you have a Chromecast), you could stitch things together by using the Google Cast extension for your Chrome Browser, and open up "c:\" on the browser to play the movie directly in the browser (since VLC stream is still in Beta):

If by chance you're downloading videos via torrents (For e.g. NASA videos), here are my GPL recommendations for Windows:

While trying to work with AWS Redshift, it was interesting to see pg_dumpall failing to dump databases in my cluster!

Delving further, for obvious reasons a managed service like this hides some global-information, which pg_dump(all) needs ... and no, this post is NOT about circumventing that.

This branch, gives a 'near' workaround for those who are okay with being able to extract all databases + (almost*) all Global information (Users etc.) in a single command.

There are caveats though:


For some people, these caveats are going to be okay, considering that they get a scriptable way of taking a dump of all databases at one go, along with User information.

If you're interested in a similar hack for AWS Postgres, you're in luck!

Down the line, I'll try to push this to the core, but for now, this works!

UPDATE: This patch is now a part of Native Postgres!! Read more here.

While trying to work with AWS RDS Postgres, it was interesting to see pg_dumpall failing to dump databases at all!

Delving further, for obvious reasons a managed service like this hides some global-information, which pg_dump(all) needs ... and no, this post is NOT about circumventing that.

This branch, gives a 'near' workaround for those who are okay with being able to extract all databases + (almost*) all Global information (Users etc.) in a single command. The *only* Global that can't be dumped are the User-Passwords, which for some people is okay, considering that they still get a scriptable way of taking a dump of all databases at one go, along with all User information.

Note: For those keen to know, the script just resets all users to be password-less, but that's better than having to do 'CREATE USER ... ' commands for your users by hand!

Down the line, I'll try to push this to the core, but for now, this works!

UPDATE: This patch is now a part of Native Postgres!! Read more here.

This is an old gotcha, that has been documented (although probably not much) and is something that we (in my company) almost got caught with recently.

This post, is about documenting the issue that looks like something that isn't going away anytime soon.


This is the output:

If you noticed, despite changing the base table's relevant column (i.e. l.id => l.id2), the VIEW kept working without fail, until you actually try to DROP / CREATE the VIEW sometime down the line.

In fact, this gets difficult to trace because the VIEW continues to work normally even after the column name change. For e.g. New rows inserted to the updated table, continue to show up in the VIEW as if its definition was up to date!

To summarize, whenever changing a column name (used in a USING clause on a dependent VIEW), be careful that PostgreSQL may not necessarily complain about the dependency. You'd need to be careful to make that check yourself. Or else its possible that sometime down the line, when you're trying to restore a production backup, you'd start seeing errors related to changes you made a year back!
No comments:

Last in the the PostgreSQL Performance series:
Please read more about Test Particulars / Chart Naming methodology from the previous post in the series.
Takeaway: 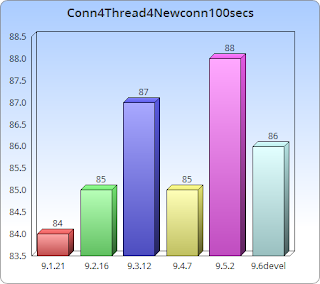 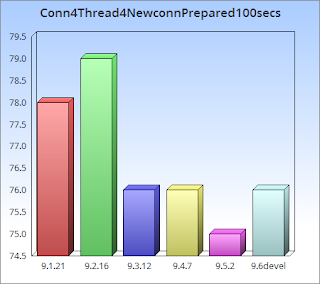 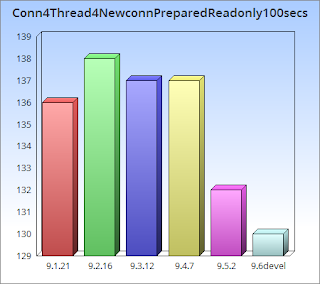 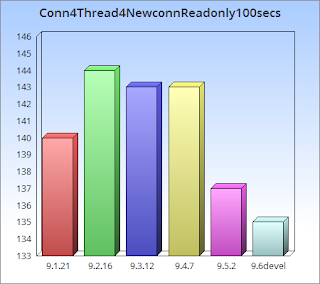 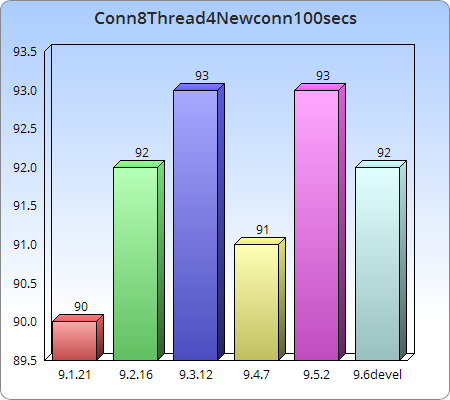 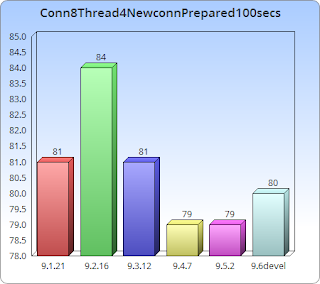 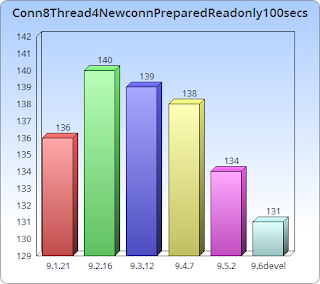 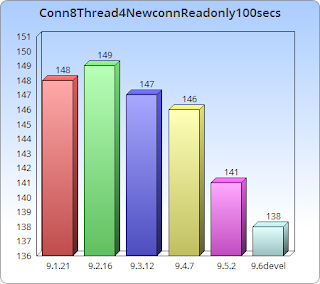 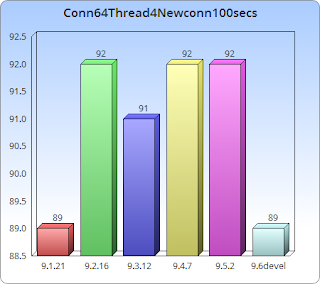 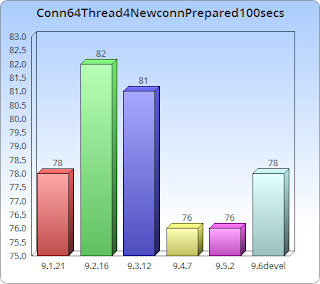 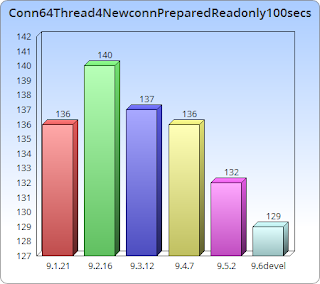 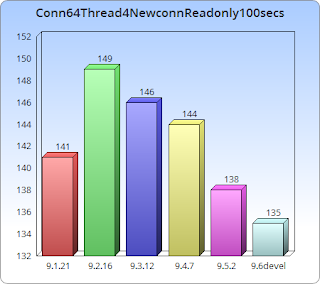 Continuing the PostgreSQL Performance series:Please read more about Test Particulars / Chart Naming methodology from the previous post in the series.Takeaway: 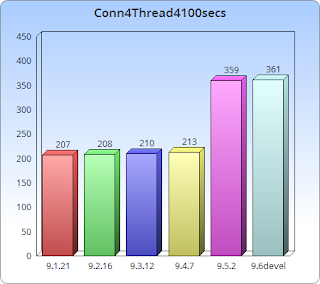 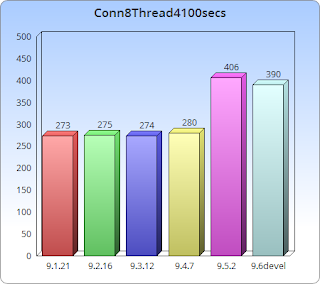 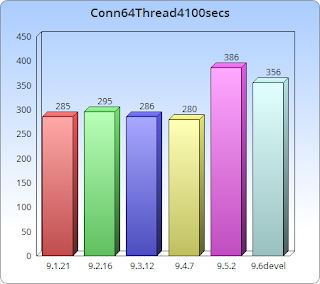 Please read more about Test Particulars / Chart Naming methodology from the previous post in the series. 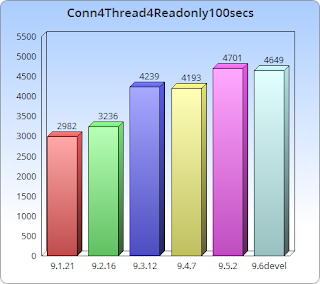 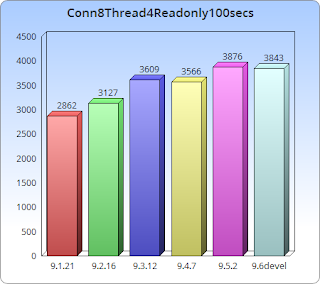 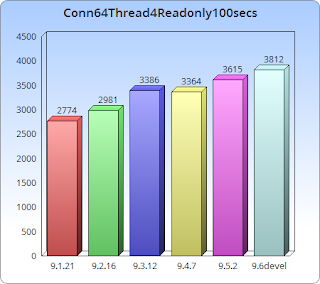 Just wanted to see how Postgres performed when comparing its performance over the different Major releases. I had a spare Pi2 lying around and found it useful for such a performance test.

More inferences to follow, in future posts.
As always, any feedback is more than welcome. 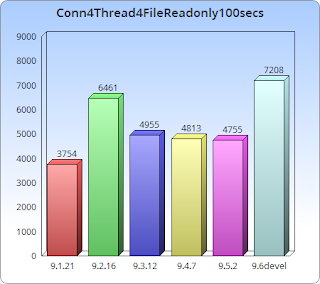 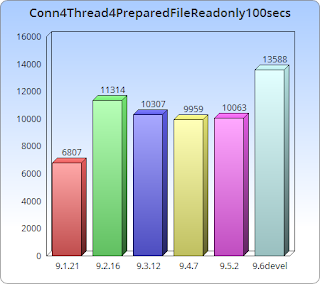 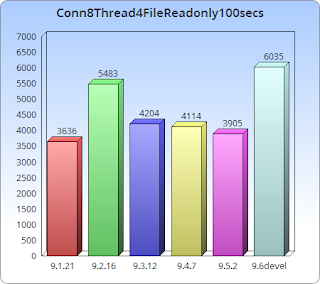 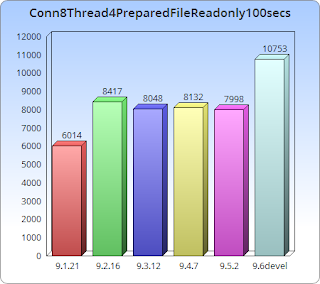 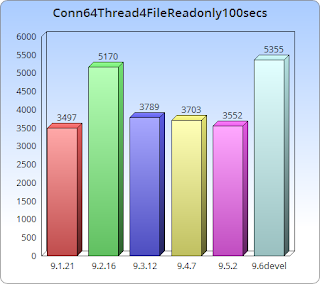 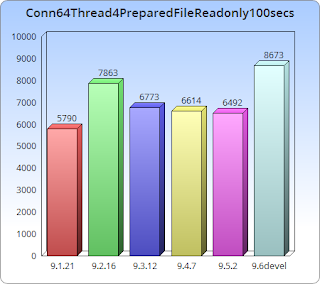 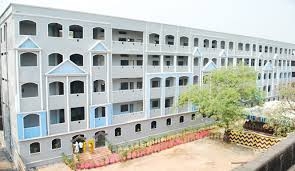 tldr; This post is about the travails of getting a student admitted to a school which (by design) is structured to shoo away anyway who comes in for new student admission to the school.

Recently, I went through an out-of-the-box feeling assisting a neighbour get their daughter (Amyra) admitted to a nearby reputed school. The specifics are irrelevant, but its best to say that Amyra's parents had been planning on admitting her to this 150 year old school for the past 7 years and despite being well-inclined, just couldn't find a way through. To note, Amyra's parents are neither financially well-off nor can they speak fluent English, and despite these obstacles Amyra herself speaks English pretty well and is otherwise a smart student.

When a close friend's daughter recently started studying in the same school, I wondered why Amyra couldn't. Especially since the missionary school concerned, were well known to charge only a fraction of the fees charged by other 'International' schools in the vicinity.

A month back, I got to know that Amyra's present school was such that the present branch only had classes up to class 6th, and she would now need to travel 10 kilometers (without school transportation) to continue in the same school, in class 7th.

In short, it was time to change school.

At this point, I felt that if something had to be done (as in help Amyra get to a good school), it had to be done now. After her parents happily approved of, I decided to see if I can get Amyra to this desired school.

It all started with a walk up to the school gate, only to be refused entry on multiple occasions, citing, no vacancy. Even when I did get through, despair prevailed, when the school guard (outside the Principal's office) turned me away for lack of an appointment.

Once I managed to barge in on a Principal and realized that there were two Principals (for different School Boards) and I had managed to go to the wrong one! (Yeah Murphy's Law) This Principal was very accommodating, invited the parents / child over and guided the child to what was best, that is, talk to the other Principal, but genuinely conveyed that she can't influence the other Principle in this matter.

Back to calling landlines which wasn't helpful either, since the reception staff too had the same 'no-vacancy' response ready at hand, and just-wouldn't-budge!

That's when I decided, that I would stop only when the (relevant) Principal says no. Anything short of that, and I just wouldn't take it hands-down. Oddly enough I would have been okay if there were (actually) no vacancy, but I wanted to hear that from the person that matters, and no one else.

Next was writing three emails (to email addresses, per their website), and seemingly none got through.

Finally wrote a snail mail (postal letter) and posted it by dropping in, to a nearby Post Office, which eventually got through. That letter, (and seemingly one of the many emails) eventually reached the Principal, who requested her staff to invite me for a meeting.

Today, am proud to say that Amyra is on her way to getting admitted to this school, without any short-cuts, no tricks, no strings, no quota and no exceptional categories applied.

Looking back (and now knowing more), I think I can understand why the management is effectively shooing away anyone who comes for admission because they're already running a packed house. Add to that the Indian Political / Legal system where anyone with any power considers his / her blessed right to get their child (list!!) admitted, black-mailing the administration into suits and false cases. (Yes, I have heard of unofficial stories where local MLAs and SHOs bring a list of names demanding that all of them be admitted. All?, Imagine!). With that perspective, shooing away everyone though looks elitist, but I think its a self-defence mechanism that the school's learnt the hard-way over the decades.

Evidently, even they do listen when someone's very persistent.

Despite the hard-work concerned, I can empathize with the management on running the school on a pittance (of a fee) and catering to owners of the Rickshaws and Audis on the same table. In fact, to me the very fact the same class of students, has such a broad spectrum of children is the best way a child learns about the world outside, but that's a whole other post.

I feel very good today and I guess the courage for this persistence came solely through the idea of what this meant for Amyra, and how big a change would this mean to her a decade later.... That and the movie Shawshank Redemption, wherein the protagonist persistently writes letters to get funding for a Prison Library.

I didn't have to go half as far (as the movie), but feel that being Patient and being Prepared to fail was what got things through.