While developing SQL based applications, it is commonplace to stumble on these 2 questions:

Although completely answering Question 1 is beyond the scope of this post, one of the important pieces that helps answering both of these questions is whether a DDL is going to cause a relfilenode change..

For a brief background, each regular table in Postgres stores data in one or more files, each of which is referenced in the postgres catalog with a relfilenode. A simple way to check whether the current implementation is going to create / refer to another copy (file) is whether the relfilenode changes. (TRUNCATE is a standout here, which by design is going to purge the table data, so although the relfilenode would change here, in total it obviously wouldn't consume anywhere close to 2x disk-space)

The table below shows which DDLs would cause a table rewrite. As has been discussed here, we need some more info to completely answer Question 1, however meanwhile this table helps in making some concurrency / disk-usage related decisions for all Postgres versions supported today. 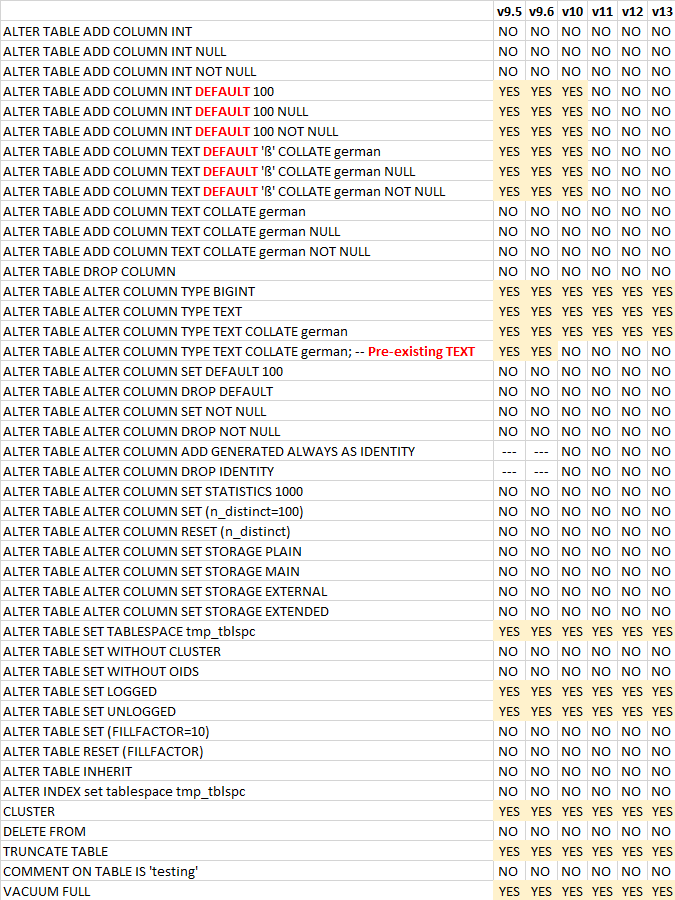 Optimizations in GROUP BY vs SELECT DISTINCT

This article aims at highlighting one aspect of how the query planner implementation of SELECT * GROUP BY differs from SELECT DISTINCT.


We see a few scenarios where Postgres optimizes by removing unnecessary columns from the GROUP BY list (if a subset is already known to be Unique) and where Postgres could do even better. To highlight this difference, here I have an empty table with 3 columns:

On this table, we can see that SELECT * GROUP BY generates the exact same plan as SELECT DISTINCT. In particular, we're interested in the "Group Key" which is the same for both SQLs:


Having said that, if the same table is created with a PRIMARY KEY, we see that GROUP BY becomes smarter, in that we can see that the "Group Key" uses the Primary Key (here it is 'b') and correcty discards columns 'c' and 'd'. Nice 😄!

Let's check if we get the same optimization if we create a UNIQUE index on the column. The answer? Sadly No! Furthermore, I went ahead and created a NOT NULL constraint, but that didn't change anything either. (Do note that UNIQUE columns can have multiple rows with NULLs).


Regarding the above, IIUC this is an obvious performance optimization that Postgres is still leaving on the table (as of v13+):

Next, does it still optimize this, if the PRIMARY KEY is not the first column in the GROUP BY? Answer? Yes! (The engine can optimize if any of the GROUPed BY column is a Primary Key! Noice !

... and what if the PRIMARY KEY is a composite key of any of the columns in the GROUP BY column list? YES again 😄 !

Lastly, although some of these "optimizations" are things-to-avoid when writing good SQL, the reality is that ORM generated SQLs aren't that smart yet and then it's great that Postgres already implements these obvious optimizations.
1 comment:

Compiling any C source on WSL (Linux on Windows)

This is a short post, in hopes that someone doesn't spend hours trying to wonder why a fresh Postgres Source Clone (or any C code for that matter) complains on the first (1st) non comment line about something very trivial (see sample below) as soon as you trigger a ./configure

This same Postgres code compiles beautifully in Ubuntu (on EC2) and so this is not about "apt vs yum" or "Ubuntu vs CentOS" etc..

What took me a while to figure was that this was one of the oldest of issues between Mac/Linux and Windows OS.

Running something as simple as the following, at the root of the source directory got the ball rolling:

The other day, I remembered an old 9.0-era mail thread (when Streaming Replication had just launched) where someone had tried to daisy-chain Postgres Replicas and see how many (s)he could muster.

If I recall correctly, the OP could squeeze only ~120 or so, mostly because the Laptop memory gave way (and not really because of an engine limitation).

I couldn't find that post, but it was intriguing to know if we could reach (at least) a thousand mark and see what kind of "Replica Lag" would that entail; thus NReplicas.

On a (very) unscientific test, my 4-Core 16G machine can spin-up (create data folders and host processes for all) 1000 Replicas in ~8m (and tear them down in another ~2m). Now am sure this could get better, but amn't complaining since this was a breeze to setup (in that it just worked without much tinkering ... besides lowering shared_buffers).

For those interested, a single UPDATE on the master, could (nearly consistently) be seen on the last Replica in less than half a second, with top showing 65% CPU idle (and 2.5 on the 1-min CPU metric) during a ~30 minute test.

Put in simple terms, what this means is that the UPDATE change traveled from the Master to a Replica (lets call it Replica1) and then from Replica1 it cascaded the change on to Replica2 (and so on a 1000 times). The said row change can be seen on Replica1000 within half a second.

So although (I hope) this isn't a real-world use-case, I still am impressed that this is right out-of-the-box and still way under the 1 second mark.... certainly worthy of a small post :) !
Host: 16GB / 4 core
Time to spin up (1000k Cascading Replicas): 8minutes
Time to tear down: 2 minutes
Test type: Constant UPDATEs (AV settings default)
Test Duration: 30min
Time for UPDATE to propagate: 500 ms!! (on average)
CPU Utilization: ~65%
CPU 1-min ratio: 2.5
No comments:

How to add remove DEFAULT PRIVILEGES

At times we need to do a DROP USER and are unable to do so, because of existing "DEFAULT PRIVILEGES" that exist associated to the user, which disallow a DROP USER to go ahead.

Common SQL such as this do not give DEFAULT PRIVILEGES.

You can find DEFAULT PRIVILEGES by using \ddp in psql. If you haven't heard of psql, probably that'd be a good place to start.

Once you have the privileges, you need to understand how permissions are assigned, some detailing on the cryptic letters and their meanings is given here.

Once you have that, you need to essentially revert the GRANTs (using REVOKE command) and remove those default privileges one by one.

A sample is given below:


This method should allow you to remove all DEFAULT PRIVILEGEs (only) for this User.

Note: Importantly, you'd need to repeat the above step for *each* database!
1 comment: